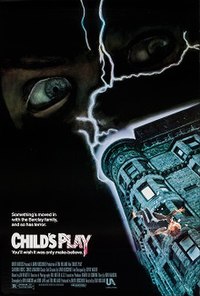 Child's Play is a 1988 American slasher film directed by Tom Holland, from a screenplay by Holland, Don Mancini and John Lafia, and based on a story by Mancini. It is the first film in the Child's Play series and the first installment to feature the character Chucky. It stars Catherine Hicks and Chris Sarandon with Brad Dourif as Chucky. Its plot follows a widowed mother who gives a doll to her son, unaware that the doll is possessed by the soul of a serial killer.

Detective Mike Norris chases fugitive serial killer Charles Lee Ray through the streets of Chicago and into a toy store. After being shot by Norris, a dying Ray performs a voodoo chant to transfer his soul to one of the Good Guy-brand talking dolls on display. The store is struck by lightning and explodes, and Norris finds Ray's lifeless body in the rubble next to the doll.