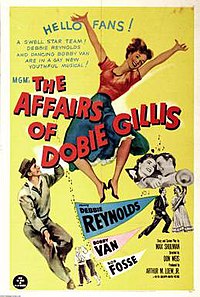 The Affairs of Dobie Gillis 1953

The Affairs of Dobie Gillis is a 1953 comedy musical film directed by Don Weis. The film is based on the short stories by Max Shulman collected as The Many Loves of Dobie Gillis (also the title of the later TV series). Bobby Van played Gillis in this musical version, co-starring with Debbie Reynolds and Bob Fosse.

At Grainbelt University, a Midwestern university, freshmen Dobie Gillis (Bobby Van) and Charlie Trask (Bob Fosse) court coeds Pansy Hammer (Debbie Reynolds) and Lorna Ellingboe (Barbara Ruick). They attend the same courses because Lorna is pursuing Dobie, who is pursuing Pansy, and Charlie is pursuing Lorna. Pansy is studious, and is encouraged by her father George (Hanley Stafford) to "learn learn learn" and "work work work," while Dobie, Charlie and Lorna only want to have fun.