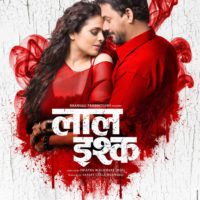 Laal Ishq is a 2016 Indian Marathi language romance mystery thriller film, directed by Swapna Waghmare Joshi and produced by Sanjay Leela Bhansali and co-produced by Shabina Khan under the Bhansali Productions banner. The film is scheduled for release on 27 May 2016.

Laal Ishq is a love story entwined with a murder that takes place in a resort, and the prime suspects for the murder are the two leads of the film.