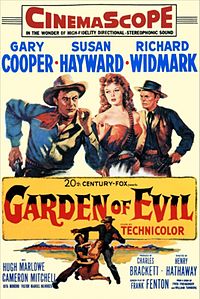 Garden of Evil is a 1954 American Western film directed by Henry Hathaway, about three somewhat disreputable 19th-century soldiers of fortune, played by Gary Cooper as an ex-lawman, Richard Widmark as a gambler, and Cameron Mitchell as a bounty hunter, who are randomly hired by a woman, portrayed by Susan Hayward, to rescue her husband (Hugh Marlowe). Rita Moreno appears at the beginning of the film as a Mexican cantina singer/dancer.

En route to California to prospect for gold, ex-sheriff Hooker (Gary Cooper), professional gambler Fiske (Richard Widmark) and bounty hunter Luke Daly (Cameron Mitchell) are forced to stop over in a tiny Mexican village by engine trouble on the ship they are taking. A desperate Leah Fuller (Susan Hayward) hires the three men and local Vicente Madariaga, to rescue her husband, John (Hugh Marlowe), who is pinned under debris from a gold mine cave-in in hostile Apache territory.