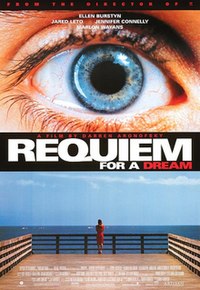 Requiem for a Dream is a 2000 American psychological drama film directed by Darren Aronofsky and starring Ellen Burstyn, Jared Leto, Jennifer Connelly, and Marlon Wayans. It is based on the 1978 novel of the same name by Hubert Selby Jr., with whom Aronofsky wrote the screenplay. The film depicts four characters affected by drug addiction and how it alters their physical and emotional state. Their addictions cause them to become imprisoned in a world of delusion and desperation. As the film progresses, each character deteriorates, and their reality is overtaken by delusion, resulting in catastrophe.

Sara Goldfarb, a widow who lives alone in a Brighton Beach apartment, spends her time watching television. Her son Harry is a heroin addict, along with his friend Tyrone and girlfriend Marion. The three traffic heroin in a bid to realize their dreams; Harry and Marion plan to open a clothing store for Marion's designs, while Tyrone seeks an escape from the ghetto and the approval of his mother. When Sara receives a call that she has been invited to her favorite game show, she begins a restrictive crash diet in an attempt to fit into a red dress that she wore at Harry's graduation.