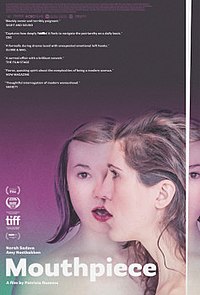 Mouthpiece is a 2018 Canadian drama film directed by Patricia Rozema. Based on the theatrical play by Amy Nostbakken and Norah Sadava, the film centres on Cassandra, a woman who is making the arrangements for her mother's funeral. Cassandra is played by both Nostbakken and Sadava, as a dramatization of her inner conflict.

A young writer, Cassandra, struggles to write a eulogy for her late mother, Elaine, who gave up her career to raise her children.