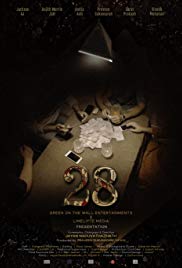 28 is a 2019 Indian Malayalam language experimental thriller feature film directed by Jayan Naduvathazhath streaming on MX Player and WinterSunTV. The film grabbed attention as the entire feature film was shot in 5 days with budget of less than Rs. 3 lakhs.

The movie 28 revolves around an overnight meeting between five friends. One of them has come to payback a long-standing debt. The friend settles his debts and leaves for abroad. Later a policeman friend comes in and finds out that the currency was fake. This triggers a rift between all of them. Each one takes stands and argues their point differently. Twists and turns follow (like the game of 28) and towards the end of the movie the mysterious sides of the characters unfold.