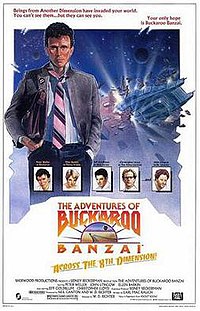 The Adventures of Buckaroo Banzai Across the 8th Dimension 1984

Buckaroo Banzai and his mentor Dr. Tohichi Hikita perfect the "oscillation overthruster", a device that allows an object to pass through solid matter. Banzai tests it by driving his Jet Car through a mountain. While in transit, he finds himself in another dimension. After exiting the mountain and returning to his normal dimension, he discovers an alien organism has attached itself to his car.