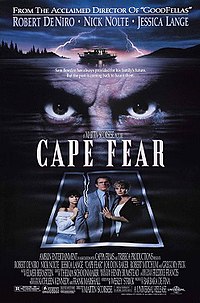 Cape Fear is a 1991 American psychological thriller film directed by Martin Scorsese as a remake of the 1962 film of the same name which was based on John D. MacDonald's 1957 novel, The Executioners. It stars Robert De Niro, Nick Nolte, Jessica Lange, Joe Don Baker, Juliette Lewis, Robert Mitchum, and Gregory Peck in his final theatrical film role. In addition to Mitchum and Peck, Martin Balsam cameos in the remake; all three starred in the original film.

Sam Bowden (Nick Nolte) is a lawyer living in North Carolina with his wife Leigh (Jessica Lange) and teenage daughter Danielle (Juliette Lewis). Max Cady (Robert De Niro), a former client of his, is released from prison after 14 years. Cady was tried for rape and battery of a 16-year-old girl and, appalled by the attack, Sam buried evidence of the victim's promiscuity, which might have lightened Cady's sentence or even secured his acquittal.