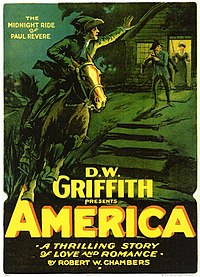 America, also called Love and Sacrifice, is a 1924 American silent historical war romance film. It describes the heroic story of the events during the American Revolutionary War, in which filmmaker D. W. Griffith created a film adaptation of Robert W. Chambers’ novel The Reckoning. The plot mainly centers itself on the battles of the New York State, with romance spliced into the individual movie scenes.

The story shifts between the British in Northern New York, and the colonial patriots in Massachusetts and Virginia. Much later in the film in New York, a little remembered sub-plot takes place. British general Captain Walter Butler (Lionel Barrymore), a loyal and ruthless supporter to the king, leads the Iroquois Native Americans in viciously barraging attacks against the settlers, including the massacre of women and children, who are siding with the Revolution.