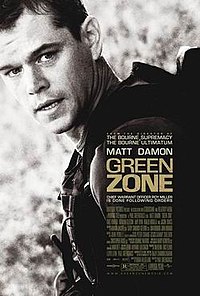 Green Zone is a 2010 action thriller film directed by Paul Greengrass. The storyline was conceived from a screenplay written by Brian Helgeland, based on a 2006 non-fiction book Imperial Life in the Emerald City by journalist Rajiv Chandrasekaran. The book documented life within the Green Zone in Baghdad during the 2003 invasion of Iraq.

On March 19, 2003, Iraqi General Mohammed Al-Rawi (Yigal Naor) flees his residence amid the bombardment of Baghdad. Before leaving the compound, he passes a notebook to his aide Seyyed, instructing him to warn his officers to get to their safehouses and wait for his signal.