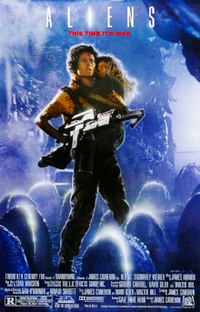 Aliens is a 1986 American science fiction action film written and directed by James Cameron, produced by Gale Anne Hurd and starring Sigourney Weaver. The second installment in the Alien franchise, it follows Ellen Ripley (Weaver) as she returns to the moon where her crew encountered the hostile Alien creature, this time accompanied by a unit of space marines. Additional roles are played by Carrie Henn, Michael Biehn, Paul Reiser, Lance Henriksen, Jenette Goldstein, William Hope, Al Matthews, and Bill Paxton.

For 57 years, Ellen Ripley has been in stasis in an escape shuttle after destroying her ship, the Nostromo, to escape a lethal alien creature that slaughtered her crew. She is rescued and debriefed by her employers at the Weyland-Yutani Corporation, but they are skeptical of her claims that her crew found alien eggs in a derelict ship on the exomoon LV-426, as it is now the site of the terraforming colony Hadleys Hope.