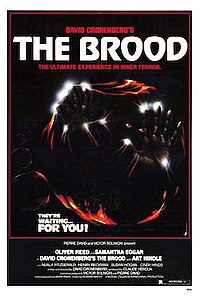 The Brood is a 1979 Canadian psychological body horror film written and directed by David Cronenberg and starring Oliver Reed, Samantha Eggar, and Art Hindle. Its plot follows a man and his mentally-ill ex-wife, who has been sequestered by a psychologist known for his controversial therapy techniques. A series of brutal unsolved murders serves as the backdrop for the central narrative.

Psychotherapist Hal Raglan runs the Somafree Institute where he performs a technique called "psychoplasmics", encouraging patients with mental disturbances to let go of their suppressed emotions through physiological changes to their bodies. One of his patients is Nola Carveth, a severely disturbed woman who is legally embattled with her husband Frank for custody of their five-year-old daughter Candice. When Frank discovers bruises and scratches on Candice following a visit with Nola, he informs Raglan of his intent to stop visitation rights. Wanting to protect his patient, Raglan begins to intensify the sessions with Nola to resolve the issue quickly. During the therapy sessions, Raglan discovers that Nola was physically and verbally abused by her self-pitying alcoholic mother, while neglected by her co-dependent alcoholic father, who refused to protect Nola out of shame and denial. Meanwhile, Frank, intending to invalidate Raglan's methods, questions Jan Hartog, a former Somafree patient dying of psychoplasmic-induced lymphoma.