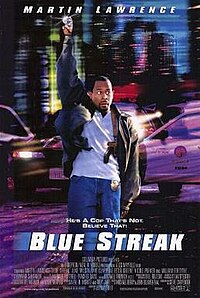 Blue Streak is a 1999 American buddy cop comedy film directed by Les Mayfield and starring Martin Lawrence, Luke Wilson, Dave Chappelle, Peter Greene, Nicole Ari Parker, and William Forsythe. It is a remake of the British film The Big Job (1965). The film was shot on location in California. The prime shooting spot was Sony Pictures Studios, which is located in Culver City, California.

Jewel thief Miles Logan participates in a $17 million diamond heist in Los Angeles. One of his accomplices, Deacon, turns on Miles and kills Eddie, Miles' best friend and another member of the team, before attempting to take the stone from Miles. The police arrive and Miles is forced to hide the diamond in the ductwork of a building being constructed. Deacon flees and Miles is arrested, and as Miles is being taken away he is horrified to discover that Eddie has been killed.