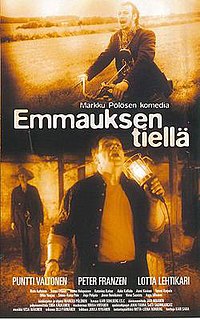 On the Road to Emmaus is a 2001 Finnish musical film written and directed by Markku Pölönen. With themes and title borrowed from of the New Testament, the film tells the story of Rane (Puntti Valtonen), a cynical real estate agent living in Helsinki, who returns to the small village where he was born in order to sell his family home. During his stay, as he's walking down the main road, he is forced to confront his past and realizes how selfish his life has been.