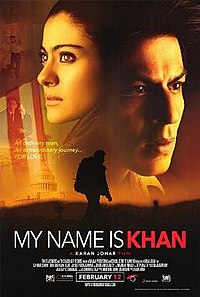 My Name Is Khan is a 2010 Indian Hindi-language drama film directed by Karan Johar, produced by Hiroo Johar and Gauri Khan, and starring Shah Rukh Khan and Kajol in lead roles. The film was jointly produced by Dharma Productions and Red Chillies Entertainment and was distributed by FOX Star Entertainment, which had bought the rights for the film for a sum of , making it the most expensive Bollywood film of 2010. It is also the highest buy over for any Indian film, surpassing Ghajinis record of .

Rizwan Khan (Shahrukh Khan) is a Muslim child who lived with his brother Zakir (Arnav Chhapwale) and his mother (Zarina Wahab) in a middle-class family in the Borivali section of Mumbai. Rizwan has Asperger's syndrome, but he has certain gifts, particularly a special ability to repair things. His difference leads to special tutoring from a reclusive scholar and extra attention from his mother, all which leads to a heightened level of jealousy from his brother, who eventually leaves his family for a life in the United States.