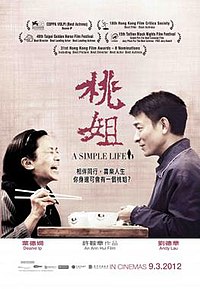 A Simple Life, also known as Sister Peach, is a 2011 Hong Kong drama film directed by Ann Hui and starring Andy Lau and Deanie Ip. Ip, in the lead role of Sister Peach, won the Best Actress Award at the 68th Venice International Film Festival. Originally, Hui considered retiring after making this film. However, due to the film's success, she changed her mind and is considering other projects.

Roger Leung (Andy Lau), an unmarried middle aged Hong Kong film producer, lives with Chung Chun-to (Deanie Ip), a maidservant who has worked for his family for decades. Returning home after a business trip, Roger discovers Chung on the floor and calls for an ambulance. At the hospital, Roger discovers that Chung has had a stroke but rather than ask for rehabilitation, Chung decides she wants to retire and asks to be put in a nursing home. While looking for a nursing home, Roger discovers one nearby that is owned by his friend. He installs Chung there and visits her in between his production jobs. While visiting To, he tells her friends and neighbours that he is her god son in order to explain their connection.