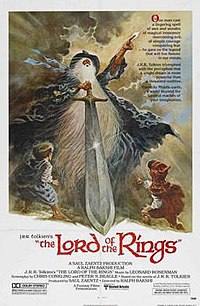 The Lord of the Rings is a 1978 American-British animated fantasy film directed by Ralph Bakshi. It is an adaptation of J. R. R. Tolkien's high fantasy epic novel of the same name, comprising The Fellowship of the Ring and some material from both books of The Two Towers. Set in Middle-earth, the film follows a group of fantasy races—Hobbits, Men, an Elf, a Dwarf and a wizard—who form a fellowship to destroy a magical ring made by the Dark Lord Sauron.

Early in the Second Age of Middle-earth, Elven smiths forge nine Rings of Power for mortal Men, seven for the Dwarf-Lords, and three for the Elf-Kings. Soon after, the Dark Lord Sauron makes the One Ring, and uses it to attempt to conquer Middle-earth. After defeating Sauron, Prince Isildur takes the Ring, but after he is killed by Orcs, the Ring lies at the bottom of the river Anduin for over 2,500 years. Over time, Sauron captures the Nine Rings and transforms their owners into the Ringwraiths. The One Ring is discovered by Déagol, whose kinsman, Sméagol, kills him and takes the Ring for himself. The Ring twists his body and mind, and he becomes the creature Gollum (Peter Woodthorpe) who takes it with him into the Misty Mountains. Hundreds of years later, Bilbo Baggins (Norman Bird) finds the Ring in Gollum's cave and brings it back with him to the Shire.