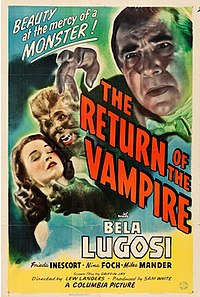 The Return of the Vampire 1944

The Return of the Vampire is a horror film released in 1943 by Columbia Pictures. The film presents an Englishwoman's two encounters with a vampire. The first encounter takes place during World War I, and the second during World War II.

During World War I, a vampire stalks London. His latest victim is admitted to the clinic of Lady Jane Ainsley (Frieda Inescort) and her colleague, Professor Walter Saunders (Gilbert Emery). They are baffled by what they regard as a severe case of anemia. The vampire infiltrates the clinic; unable to finish his previous victim, he preys on Prof. Saunders' granddaughter instead. Saunders comes to believe that both patients are victims of a vampire. He shows Lady Jane puncture marks on their necks.