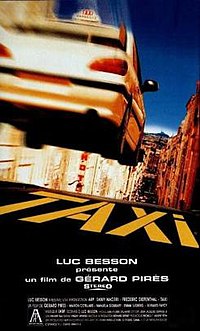 Taxi is a 1998 French action comedy film starring Samy Naceri, Frédéric Diefenthal and Marion Cotillard, written by Luc Besson and directed by Gérard Pirès. It has four sequels, Taxi 2, Taxi 3, Taxi 4 and Taxi 5 and one American remake, Taxi (2004). It also provided the premise for the 2014 American television show, Taxi Brooklyn.

Daniel Morales (Samy Naceri) is a highly talented driver living in Marseille, France, who has little regard for traffic laws and the police, and is in a loving relationship with his girlfriend Lilly (Marion Cotillard). He leaves his job as a delivery man at local pizza parlor "Pizza Joe" to become a taxi driver, driving his white custom 1997 Peugeot 406, which is equipped with various racing modifications that are mechanically concealed.