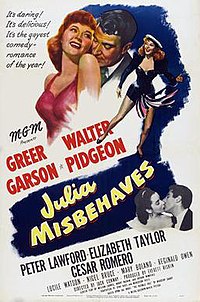 Julia Misbehaves is a 1948 American romantic comedy film starring Greer Garson and Walter Pidgeon as a married couple who are separated by the man's snobbish family. They meet again many years later, when the daughter whom the man he has raised, played by Elizabeth Taylor, invites her mother to her wedding. The film also features Peter Lawford and Cesar Romero.

In 1936 London, mature showgirl Julia Packett leads a precarious life. She pretends to be contemplating suicide in order to finagle some money out of a male friend in order to pay her bills. Then she receives a wedding invitation from her daughter Susan. As a young woman, Julia had married wealthy William Packett. However, after 14 months of marriage, his disapproving mother broke them up. Julia returned to show business but left her infant daughter with William so that the child could be raised in a safe environment.