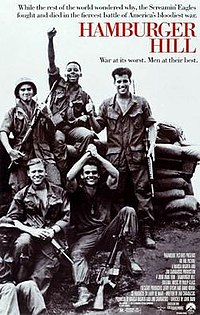 Hamburger Hill is a 1987 American war movie about the 1969 assault during the Vietnam War of the U.S. Army's 3d Battalion, 187th Infantry, 101st Airborne Division (Airmobile) "Screaming Eagles" on Ap Bia Mountain near the Laotian border, on a well-fortified position, including trenchworks and bunkers, of the North Vietnamese Army. American military records of the battle refer to the mountain as "Hill 937", its map designation having been derived from it being high.

In 1969, a platoon of soldiers fight in Vietnam, ending with a soldier dying on a helicopter. As they prepare to be sent into action again, a platoon of the 3d Battalion, 187th Infantry, 101st Airborne Division (Airmobile), receives five new recruits as replacements—Beletsky, who constantly complains that he won't be able to remember everything he has been taught; Languilli, who is obsessed with sex and annoyed when people mispronounce his name; Washburn, a quiet, conservative man and the only African-American in the batch of replacements; Bienstock, who is outgoing and has volunteered for combat duty in Vietnam; and finally Galvan, the quietest but most promising of the new soldiers.