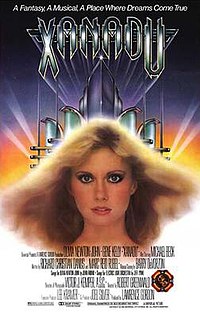 Xanadu is a 1980 American musical fantasy film written by Richard Christian Danus and Marc Reid Rubel, and directed by Robert Greenwald. The film stars Olivia Newton-John, Michael Beck and Gene Kelly in his final film role. It features music by Newton-John, Electric Light Orchestra, Cliff Richard, and the Tubes. The title is a reference to the nightclub in the film, which takes its name from Xanadu, the summer capital of Kublai Khan's Yuan Dynasty in China. This city appears in Kubla Khan by Samuel Taylor Coleridge, an 1816 poem that is quoted in the film.

Sonny Malone is a struggling artist in Los Angeles attempting to make a living by freelancing. He rips up one of his failed sketches and throws it into the wind. It hits a mural of nine sisters and brings them to life. The sisters fly across Earth, but one of them roller skates through town and collides with Sonny. She kisses him before skating away, leaving him confused.