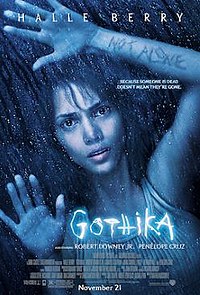 Gothika is a 2003 American supernatural psychological horror thriller film directed by Mathieu Kassovitz and written by Sebastian Gutierrez. Halle Berry plays a psychiatrist in a women's mental hospital who wakes up one day to find herself on the other side of the bars, accused of having murdered her husband. The film was first released on November 21, 2003, in the United States. Gothika grossed $141.6 million.

Dr. Miranda Grey (Halle Berry) is a psychiatrist who works at the women's ward of the Woodward Penitentiary, and has a car accident after trying to avoid hitting a girl standing in the middle of the road during a stormy night. She rushes to try to help the girl. The girl turns out to be a ghost who possesses Miranda's body. Miranda wakes up as a patient in the hospital where she works, and receives treatment from her colleague, Dr. Pete Graham (Robert Downey Jr.). Drugged and confused, Miranda has no memory of what happened after the car accident.