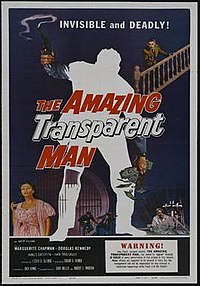 The Amazing Transparent Man is a 1960 science fiction film starring Marguerite Chapman. It is an American B-movie which follows the story of an insane ex–U.S. Army major who uses an escaped criminal to steal materials to improve the invisibility machine his scientist prisoner made. It was one of two sci-fi films shot back-to-back in Dallas, Texas by director Edgar G. Ulmer (the other being Beyond the Time Barrier, also released in that same year). The combined filming schedule for both films was only two weeks. The film was later featured in an episode of Mystery Science Theater 3000.

Former U.S. Army major Paul Krenner (James Griffith) plans to conquer the world with an army of invisible soldiers and will do anything to achieve that goal. With the help of his hired muscle, Julian (Red Morgan), Krenner forces Dr. Peter Ulof (Ivan Trisault) to perfect the invisibility machine Ulof invented. He keeps Ulof's daughter, Maria (Carmel Daniel), imprisoned to keep Ulof in line.