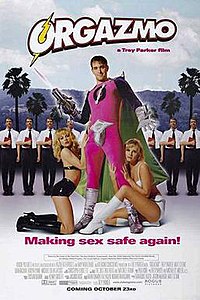 Everyman Mormon missionary Joseph Young, assigned with his mission partner to Los Angeles, finds the city to be a hostile and unenthusiastic place for their work. The problems worsen when they knock on the door of sleazy porn director Maxxx Orbison and several security guards are sent to dispose of them. Joe defeats all of them singlehandedly with a variety of martial arts skills. Impressed by his performance and bored of his current project's lead actor, Orbison attempts to hire Joe to be the title character and lead of his pornographic superhero film, Orgazmo. Joe is conflicted because of his beliefs, but the salary offered would pay for a wedding in the temple in Utah where his fiancée Lisa has expressed a strong desire to wed. Joe reluctantly accepts despite being given a sign from God.