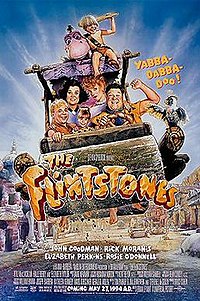 The Flintstones (also known as The Flintstones Movie or The Flintstones: The Live-Action Movie in the working title) is a 1994 American family comedy film directed by Brian Levant and written by Tom S. Parker, Jim Jennewein, and Steven E. de Souza based on the 1960–1966 animated television series of the same name. The film stars John Goodman as Fred Flintstone, Rick Moranis as Barney Rubble, Elizabeth Perkins as Wilma Flintstone and Rosie O'Donnell as Betty Rubble, along with Kyle MacLachlan as a villainous executive-vice president of Fred's company, Halle Berry as his seductive secretary, and Elizabeth Taylor (in her final theatrical film appearance), as Pearl Slaghoople, Wilma's mother. The B-52's (as The BC-52's in the film) performed their version of the cartoon's theme song.

In prehistoric suburban Bedrock, Slate & Co.'s new vice-president Cliff Vandercave and secretary Sharon Stone discuss their plan to swindle the company of its vast fortune, pin the theft on an employee, and flee. Fred Flintstone loans his best friend and neighbor Barney Rubble money so that he and his wife Betty can adopt a little boy named Bamm-Bamm, who can only pronounce his own name. Though initially hard to control because of his super strength, Bamm-Bamm eventually warms up to his new family and befriends Fred’s daughter Pebbles. Despite his mother-in-law Pearl Slaghoople's objections, Fred's wife Wilma remains supportive of his decision to loan the Rubbles money.