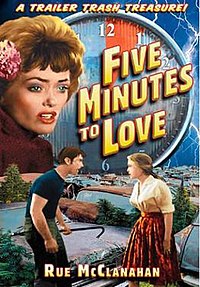 Five Minutes to Love (originally known as The Rotten Apple and It Only Takes Five Minutes) is a 1963 American drama film directed by John Hayes and starring Rue McClanahan as Poochie, a woman who lives in a junkyard. The film was critically lambasted, and later picked up by exploitation filmmaker Kroger Babb.