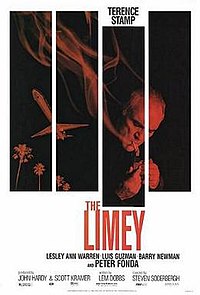 The Limey is a 1999 American crime film directed by Steven Soderbergh and written by Lem Dobbs. The film features Terence Stamp, Lesley Ann Warren, Luis Guzmán, Barry Newman, Nicky Katt, and Peter Fonda. The plot concerns an English career criminal (Stamp) who travels to the United States to investigate the recent suspicious death of his daughter. It was filmed on location in Los Angeles and Big Sur.

An Englishman named Wilson travels to Los Angeles to investigate the death of his daughter, Jenny, reported to have died in a car accident, while Wilson suspects murder. Recently released from a British prison, he is a hardened man. Arriving in Los Angeles, he meets Jenny's friends Eduardo and Elaine and questions them. Finding they pass his initial inquiry, he elicits their help in investigating Jenny's death. One suspect who emerges is Jenny's boyfriend, a record producer named Terry Valentine. In investigating him it is learned that in addition to his legitimate record company business, Valentine has involvement in drug trafficking. His involvement is managed through his security consultant, Avery. Wilson locates a warehouse used by the drug trafficker and questions the men there. Laughing at him, they insult his daughter, they beat him, and throw him out onto the street. Undeterred, Wilson draws a hidden pistol and returns to the warehouse, shooting dead all but one of the employees. As the survivor flees, Wilson shouts "Tell him... I'm coming!"