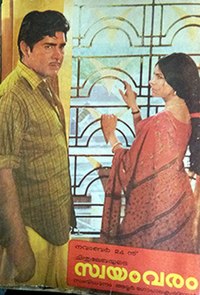 Swayamvaram is a 1972 Indian Malayalam-language drama film co-written and directed by Adoor Gopalakrishnan, starring Madhu and Sharada in the lead roles. Notable smaller roles were played by Thikkurisi Sukumaran Nair, Adoor Bhavani, K. P. A. C. Lalitha, and Bharath Gopi. The film depicts the life of a couple—Vishwam (Madhu) and Sita (Sharada)—who have married against their parents' wishes and want to start a new life at a new place. The title is an allusion to the ancient Indian practice of a girl of marriageable age choosing a husband from among a list of suitors.

A newly wed couple, Vishwam (Madhu) and Sita (Sharada), have married against the preference of their families, and left their hometown. Both want to start a new life at a new place. Initially, they stay in a decent hotel but soon due to financial reasons they move to another, ordinary hotel.