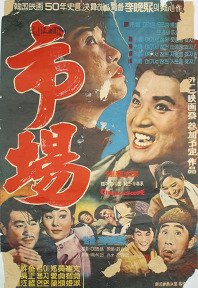 Market (시장 - Shijang) is a 1965 South Korean film directed by Lee Man-hee. It was awarded Best Film at the Blue Dragon Film Awards.

Bok-nyeo, a mentally handicapped woman, supports her lazy husband by selling apples at the public marketplace. When her husband abandons her for another woman, another man who sympathizes with Bok-nyeo, kills him.