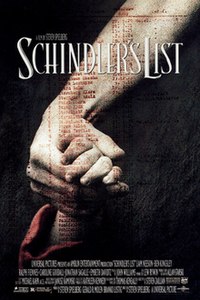 Schindler's List is a 1993 American epic historical drama film directed and produced by Steven Spielberg and written by Steven Zaillian. It is based on the 1982 non-fiction novel Schindler's Ark by Australian novelist Thomas Keneally. The film follows Oskar Schindler, a German industrialist who together with his wife Emilie Schindler saved more than a thousand mostly Polish-Jewish refugees from the Holocaust by employing them in his factories during World War II. It stars Liam Neeson as Schindler, Ralph Fiennes as SS officer Amon Göth and Ben Kingsley as Schindler's Jewish accountant Itzhak Stern.

In Kraków during World War II, the Germans have forced local Polish Jews into the overcrowded Kraków Ghetto. Oskar Schindler, an ethnic German from Czechoslovakia, arrives in the city hoping to make his fortune. A member of the Nazi Party, Schindler lavishes bribes on Wehrmacht (German armed forces) and SS officials and acquires a factory to produce enamelware. To help him run the business, Schindler enlists the aid of Itzhak Stern, a local Jewish official who has contacts with black marketeers and the Jewish business community. Stern helps Schindler arrange financing for the factory. Schindler maintains friendly relations with the Nazis and enjoys wealth and status as "Herr Direktor", and Stern handles administration. Schindler hires Jewish workers because they cost less, while Stern ensures that as many people as possible are deemed essential to the German war effort, which saves them from being transported to concentration camps or killed.