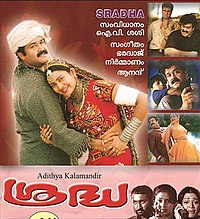 Sradha is a 2000 Indian Malayalam language action film directed by I. V. Sasi and written by T. Damodaran and Dr. Rajendrababu. The film stars Mohanlal, Shobhana, Abhirami, and Indraja. It features a musical score and soundtrack composed by Bharathwaj. The plot follows the investigations of a police squad led by Ganga Prasad (Mohanlal) for a terrorist threat in the city. The film was released on 7 July 2000. It was dubbed and released in Tamil titled Dhool Police.

Ganga Prasad IPS (Mohanlal) is a police officer of the Anti Terrorist Wing of the State Police. He has a wife Suma (Shobana) and son Abi. A girl named Swapna (Abhirami), who is fondly attracted to Prasad, falls in love with him. Meanwhile, a group of hard-core terrorists led by Lucifer Munna (Arun Pandian) and Janisha