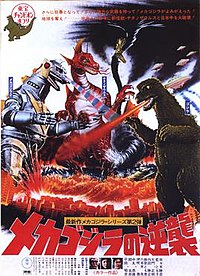 Terror of Mechagodzilla, released in Japan as is a 1975 Japanese kaiju film directed by Ishirō Honda, written by Yukiko Takayama, and produced by Tomoyuki Tanaka and Henry G. Saperstein, with special effects by Teruyoshi Nakano. The film was produced and distributed by Toho; it is the 15th film in the Godzilla franchise, serving as a direct sequel to the 1974 film Godzilla vs. Mechagodzilla, and is the final film in the franchise's Shōwa period.

Continuing after the end of the events of Godzilla vs. Mechagodzilla, Interpol agents, led by Inspector Kusaka, search for the pieces of Mechagodzilla at the bottom of the Okinawan Sea. Using the submarine Akatsuki, they hope to gather information on the robot's builders, the alien Simeons. The Akatsuki is suddenly attacked by a giant aquatic dinosaur called Titanosaurus and the crew vanishes.