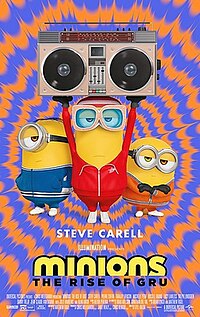 Minions: The Rise of Gru (also known as Minions 2) is an upcoming American computer-animated comedy film produced by Illumination and distributed by Universal Pictures. It is the sequel to the spin-off prequel Minions (2015) and the fifth installment overall in the Despicable Me franchise. Directed by Kyle Balda, with Brad Ableson and Jonathan del Val as co-directors, the film sees the return of Steve Carell as Gru, and Pierre Coffin as The Minions, along with Taraji P. Henson, Michelle Yeoh, RZA, Jean-Claude Van Damme, Lucy Lawless, Dolph Lundgren, Danny Trejo, Russell Brand, Julie Andrews, and Alan Arkin.

Set just after the 2015 film, this time in the early 1970s, a 12-year old Gru is growing up in the suburbs. A fanboy of a supervillain group known as the Vicious 6, Gru hatches a plan to become evil enough to join them. When the Vicious 6 fire their leader, legendary fighter Wild Knuckles, Gru interviews to become their newest member.