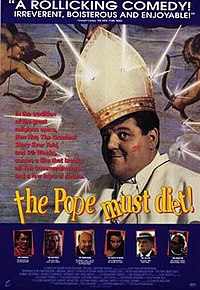 The Pope Must Die (U.S./Canadian alternative title The Pope Must Diet!) is a 1991 comedy film directed by Peter Richardson and released by Palace Pictures with the backing of Channel 4 Films. The script was written by Richardson with Pete Richens, derived from elements of an earlier screenplay for a three-part mini-series satirising the Catholic Church, which was rejected by Channel 4. The Pope Must Die stars Robbie Coltrane as a low ranking priest who is mistakenly elected Pope, then has to avoid being assassinated by the Mafia. The film co-stars Adrian Edmondson, Annette Crosbie, Herbert Lom, Alex Rocco and Richardson.

The plot is predicated on the Vatican being controlled by the Mafia boss Vittorio Corelli (Herbert Lom). The movie opens with the death of the previous Pope followed by a deadlocked conclave that lasts for 25 days. The conclave is ended by the Mafia's tame Cardinal Rocco (Alex Rocco), who successfully persuades the College of Cardinals to elect in absentia the Mafia's favoured candidate to the papacy, Albini (Janez Vajevec), a priest in the service of the Mafia, whom Rocco passes off as an absent "Cardinal Albini".