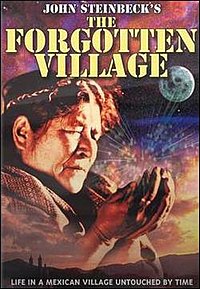 The Forgotten Village is a 1941 American documentary film—some sources call it an ethnofiction film—directed by Herbert Kline and Alexander Hammid. The film was written by John Steinbeck, narrated by Burgess Meredith, and with music by Hanns Eisler. The film was released by the film distribution partnership of Arthur Mayer & Joseph Burstyn.