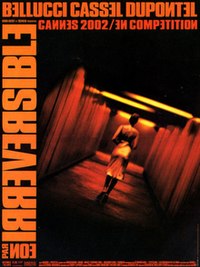 Irréversible is a 2002 French experimental psychological thriller drama film, written and directed by Gaspar Noé and starring Monica Bellucci, Vincent Cassel, and Albert Dupontel. The film employs a reverse chronology and follows two men through the streets of Paris as they seek to avenge a brutally raped girlfriend. Much of the film's soundtrack was composed by Thomas Bangalter, one half of the electronic music duo Daft Punk.