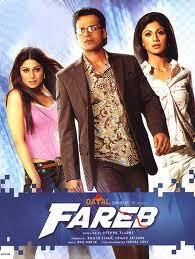 Aditya (Manoj Bajpai) works as a creative director in an advertising agency. His wife, Neha (Shilpa Shetty), a medical practitioner, is devoted to her husband and kid. Riya (Shamita Shetty) was married to a corporate honcho (Bakul Thakker) who happened to be a client of Aditya's ad-agency. Riya and Aditya meet at a presentation and she gets attracted to him. Riya is completely smitten by Aditya and tries to seduce him time and again. He spurns her initially but succumbs to her charms eventually. This leads to a rift between Aditya and Neha. And then the unthinkable happens: Riya is murdered. The needle of suspicion points towards Aditya and the cops (Kelly Dorji, Hemant Pandey) arrest him. Someone is also watching Aditya and blackmailing him for his affair with Riya. Who killed Riya?