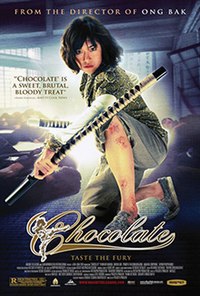 Chocolate, also known as Zen, Warrior Within, is a 2008 Thai martial arts film starring Yanin "Jeeja" Vismistananda in her debut film performance. It is directed by Prachya Pinkaew, with martial arts choreography by Panna Rittikrai. It also stars Hiroshi Abe and Pongpat Wachirabunjong.

Zin is the Thai lover of Yakuza boss Masashi. Zin was previously the girlfriend of Thai gangster No. 8, who was jealous of her relationship with rival gangster Masashi. After Zin chooses Masashi, he shoots his own toe as a symbolic gesture and forbids Zin from ever seeing him again. Zin asks Masashi to go back to Japan, as they would not be able to be together safely. He begrudgingly leaves.