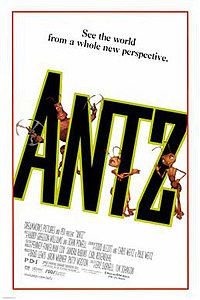 Antz is a 1998 American computer-animated adventure comedy film directed by Eric Darnell and Tim Johnson (in their feature directorial debuts) from a screenplay by Todd Alcott, Chris Weitz, and Paul Weitz. The film features the voices of Woody Allen, Sharon Stone, Jennifer Lopez, Sylvester Stallone, Christopher Walken, Dan Aykroyd, Anne Bancroft, Danny Glover and Gene Hackman. Some of the main characters share facial similarities with the actors who voice them. Antz was the first film from DreamWorks Animation, and the second feature-length computer-animated film after Disney and Pixar's Toy Story (1995).

Z Marion-4195, or "Z" for short, is a neurotic and pessimistic worker ant who longs to express himself. While at a bar one night, Z falls in love with the ant colony's princess, Bala, when she visits the bar to escape her suffocating royal life.