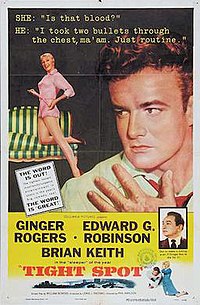 Tight Spot is a 1955 American film noir directed by Phil Karlson and written by William Bowers, based on the play Dead Pigeon, by Leonard Kantor. It stars Ginger Rogers, Edward G. Robinson, Brian Keith, Lorne Greene, and Eve McVeagh. The story was inspired by Senator Estes Kefauver's tactics in coercing Virginia Hill to testify in the Bugsy Siegel prosecution.

Sherry Conley (Ginger Rogers) is a model who is in prison for a crime she did not knowingly commit. She is offered a deal for her freedom by U.S. attorney Lloyd Hallett (Edward G. Robinson) if she will testify as a witness in the trial of mobster Benjamin Costain (Lorne Greene). Hallett hides her in a hotel under the protection of a squad of detectives led by Lt. Vince Striker (Brian Keith), where she stalls making a final decision while she enjoys expensive meals from room service. Despite the presence of the prison matron escort Willoughby, sparks begin to fly between cop and potential witness.