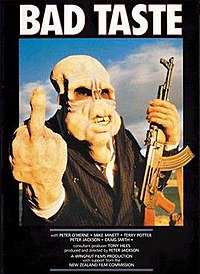 Bad Taste is a 1987 New Zealand independent science-fiction comedy horror splatter film directed, written, produced, photographed and co-edited by and co-starring Peter Jackson, who also made most of the makeup and special effects. Produced on a low budget, it is Jackson's first feature film. Jackson and friends take on most of the key roles, both on and off-screen. The plotline sees aliens invade the fictional New Zealand village of Kaihoro to harvest humans for their intergalactic fast food franchise, where they face off against a four-man paramilitary force, of which at least one member appears to have gone insane. It was a film that provided Jackson with the necessary leverage needed to advance in the industry.

The Astro Investigation and Defence Service (AIDS) sends their agents, Derek, Frank, Ozzy, and Barry to investigate the disappearance of the entire population of the town of Kaihoro. They find the town has been overrun by man-eating space aliens disguised as humans in blue shirts. Barry kills one of the aliens and is attacked by others. After Derek notifies Frank and Ozzy, he begins torturing Robert, an alien they caught earlier. Robert's screaming attracts a number of aliens in the area. Derek kills the would-be rescuers, but he is attacked by Robert and falls off a cliff ledge, to his presumed death.