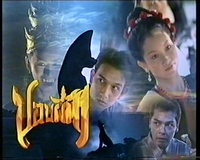 Pob Pee Fah (; ) is a Thai ghost story, made as a TV series (known as a lakorn, the Thai equivalent of a soap opera). Set partly in the 19th century, it shares some plot details with an earlier series, Jao Nang, which aired in 1990, and on which some observers believe it was based.

Pob Pee Fah tells the tale of a princess, how she is originally possessed by a spirit or ghost known as a Pee Fah, or Pee Pob, and how the ghost subsequently takes possession of her descendants, one generation at a time.