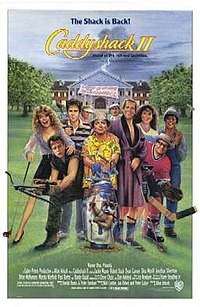 Caddyshack II is a 1988 American sports comedy film and a sequel to Caddyshack. The film stars Jackie Mason, Dan Aykroyd, Robert Stack, Dyan Cannon, Randy Quaid, Chevy Chase, Jonathan Silverman, and Jessica Lundy. It was written by various outside writers, but is credited to the first draft by Peter Torokvei and Harold Ramis, who also co-wrote and directed the first, and is directed by Allan Arkush. The film garnered a PG rating, in contrast to the original's R rating. The film was given scathing reviews by critics, but Kenny Loggins' "Nobody's Fool" was a chart success, hitting #8 on the Billboard Hot 100.

Kate Hartounian (Jessica Lundy) is the daughter of a wealthy and widowed real estate developer of Armenian and Jewish descent. Eager to improve her lot in life, she makes friends with Miffy Young (Chynna Phillips), a snooty WASP girl, who encourages her and her father to join their country club.