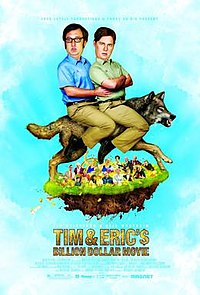 Tim and Eric's Billion Dollar Movie is a 2012 American comedy film co-written, co-directed, and co-produced by Tim Heidecker and Eric Wareheim. The film is both Heidecker and Wareheim's feature directorial debuts.

Tim Heidecker and Eric Wareheim are two filmmakers who are given a record-setting $1 billion budget to make a movie. The funds are provided by Tommy Schlaaang and the Schlaaang Corporation. The two waste all of their money on the making of Bonjour, Diamond Jim, a three-minute film (based on a poem by "personal shopper and spiritual guru" Jim Joe Kelly (Zach Galifianakis), whom they paid $500,000 a week), plus expensive makeovers, 10-course lunches, real diamonds for Diamond Jim's suit, and a Johnny Depp impersonator. Because of this, the two leave Los Angeles in fear that they will go to prison or be hunted down by the Schlaaang Corp.