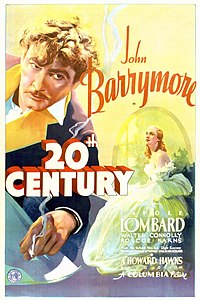 Twentieth Century is a 1934 American pre-Code screwball comedy film directed by Howard Hawks and starring John Barrymore, Carole Lombard, Walter Connolly, Roscoe Karns, and Edgar Kennedy. Much of the film is set on the 20th Century Limited train as it travels from Chicago to New York City. Ben Hecht and Charles MacArthur adapted their 1932 Broadway play of the same name – itself based on the unproduced play Napoleon of Broadway by Charles Bruce Millholland – with uncredited contributions from Gene Fowler and Preston Sturges.

Ebullient Broadway impresario Oscar Jaffe (John Barrymore) takes an unknown lingerie model named Mildred Plotka (Carole Lombard) and makes her the star of his latest play, despite the grave misgivings of everyone else, including his two long-suffering assistants, accountant Oliver Webb (Walter Connolly) and the consistently tipsy Owen O'Malley (Roscoe Karns). Through intensive training, Oscar transforms his protegée into the actress "Lily Garland", and both she and the play are resounding successes. Over the next three years, their partnership spawns three more smash hits, and Lily is recognized as a transcendent talent.