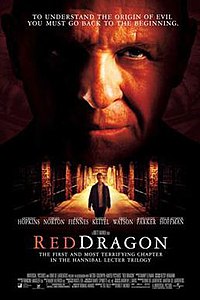 Red Dragon is a 2002 psychological thriller film based on the 1981 novel by Thomas Harris. It was directed by Brett Ratner and written by Ted Tally. A prequel to The Silence of the Lambs (1991), it sees FBI agent Will Graham (Edward Norton) enlisting the help of serial killer Hannibal Lecter (Anthony Hopkins) to catch another killer, Francis Dolarhyde (Ralph Fiennes). Harvey Keitel, Emily Watson, Mary-Louise Parker, and Philip Seymour Hoffman also star.

In 1980, FBI agent Will Graham visits forensic psychiatrist Hannibal Lecter to discuss a case. Graham has been working with Lecter on a psychological profile of a serial killer who removes edible body parts from his victims; Graham is certain the killer is a cannibal. Realizing Graham is close to discovering he is the killer, Lecter stabs him, but Graham subdues him before falling unconscious. Lecter is imprisoned in an institution for the criminally insane, and Graham, traumatized, retires to Florida with his family.