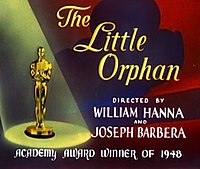 The Little Orphan is a 1949 American one-reel animated cartoon and the 40th Tom and Jerry cartoon, released in theaters on April 30, 1949 by Metro-Goldwyn Mayer. It was produced by Fred Quimby and directed by William Hanna and Joseph Barbera, with music by Scott Bradley. The cartoon was animated by Irven Spence, Kenneth Muse, Ed Barge and Ray Patterson. The short features Nibbles, a young mouse who is insatiably hungry.

Jerry is sitting in a mouse-sized chaise lounge reading Good Mousekeeping and eating cheese he is pulling off a mousetrap that has been set just in front of his mousehole. When his doorbell rings, he opens the door but does not see anyone; Nibbles zips through the door under his nose. Jerry shrugs in confusion, but then turns to see Nibbles pulling on the cheese in the mousetrap. He whisks him away just before it springs. Jerry then finds a note pinned to Nibbles red scarf (which matches his cap, both trimmed with white fur). Nibbles is the orphan who Jerry had agreed to host for Thanksgiving. A postscript on the note warns: "He's always hungry".