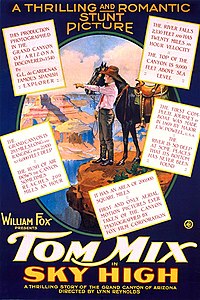 Sky High is a 1922 American silent western film written and directed by Lynn Reynolds and starring Tom Mix, J. Farrell MacDonald, Eva Novak and Sid Jordan. The action in Sky High takes place in 1922 and while the characters ride horses and fight in saloons, they also use telephones, automobiles and even an aircraft. In 1998, the film was selected for preservation in the United States National Film Registry by the Library of Congress as being "culturally, historically, or aesthetically significant".

Grant Newbury (Tom Mix), Deputy Inspector of Immigration at the US/Mexico border is asked by his boss to infiltrate a gang smuggling Chinese workers through the border at Calexico, in order to identify and arrest their ringleader. Meanwhile, in Chicago, Estelle Halloway (Eva Novak) is disappointed because her guardian wrote that she would not be able to spend her holidays with him in Calexico as planned. When she wires him that she will come nevertheless with her roommate Marguerite (Adele Warner) and her brother (William Buckley), he tells her that they will meet instead near the Grand Canyon as it is too warm in Calexico.